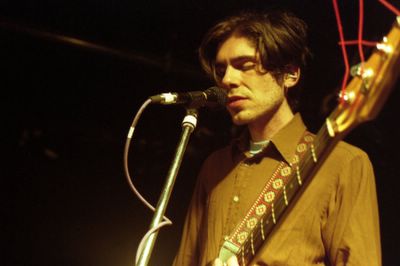 The last two years of high school I listened to Rodan’s Rusty twice a day. They were by far my favorite band back then. When Rodan broke up I was really devastated. In college I followed Jason’s group Rachel’s religiously. While I loved the Rachel’s I longed for the return to the rock. When Shipping News’ Save Everything came out it was all I was hoping for and more. This interview was conducted while the Shipping News was touring in support of Very Soon & in Pleasant Company. It is a great honor to meet one of my musical hero’s of my misspent youth. What was even better is that he was actually a real genuine and down to earth person as well. –Dan Cohoon (2001)

Dan Cohoon: When did Rodan come about?
Jason Noble: We started very early in 1992 after Jeff and I were working on other musical projects. We were living in a house with people in the band Crane. We knew Tara really well. So John Cook was who was the bass player and singer; he ended up playing drums and bass guitar in the band Crane. He was our first drummer. The three of us started playing a whole lot together. I guess Jeff, Tara and I started writing more and John started playing more. We started to go play out of town. We played our first show in July of 1992. We did some recordings at a place called the Hat Factory, which was the place where Jeff and I worked on a couple of different things. We had done one of the recordings for Rachel's. We were friends with this guy that we knew from Baltimore. We went up there and John, Tara, and I recorded our first collected group of songs with our friends from Simple Machines. From there we started going out playing and touring, having our first real experience of a traveling working band. Then John Weiss started playing with us in January of 1993 and then Kevin joined us eight months after that. He was the one and traveled for the longest part of touring we did with the band.

DC: Are any of the recordings from that period on Handwriting?
JN: One of the things from 1991 is on the first record. There is some other stuff from 1993 right in the center of doing Rodan stuff. Rodan was a full time project; we would practice a lot every week. With Rachel's a lot of the time we were in different cities. It was just a different process.

DC: So why did Rodan break up?
(Kyle from Shipping News walks up as I ask the question.)
JN: He just asked me an infamous question. He asked why Rodan broke up. I've got a good answer. This isn't the pat answer. We broke up so that we could stay friends, so that we could explore different things. We were pretty hyper people. We are hyper people still. We just wanted to try a lot of different things that weren't all the same things. So instead of making Rodan into several different bands we just made different bands. It is a little self evident how everyone just did different things. I think that it was real positive for us as people. We're all still friends so I guess it worked. It wasn't this fiery insane thing. Something ending that you really care about is always emotional. It wasn't like I'm never going to talk to you again. . . . It was Kyle's fault. Kyle broke the band up.
Kyle Crabtree: I used to be a woman.
JN: Used to be?
KC: I got in-between everybody.

DC: It seems that a lot of the music of the late 1990s was a reaction against the loud bombastic stuff of the early 1990s. It became more punk rock (in the early 1990s sense of the word before it became a narrowly defined sub-genre) to make pretty music.
JN: There is a kind of challenge not to play music that is anticipated in the environment; the venue is accustomed to this really bombastic heavy ferocious music. We are going to ask for people to have some patience with us. We are not going to demand your attention; we are going to ask for it. It wasn't a conscious movement. There was so much rock music out side of the actually independent music world that was sort of bombarding every one. We needed to carve our own way from this. If that means drawing on Neil Young or Philip Glass that's ok because those people are as punk rock as Big Black or Sonic Youth.

DC: Do you think geography has an effect on musical styles?
JN: I can't imagine that our environment doesn't change what we make or what we produce. The type of bands and type of atmosphere in Louisville are pretty conducive to having some mental space to make music and there are a lot of people to play shows with. It was a pretty energetic time, and it still is. Not even scratching the surface of all the music in the world that is directly related to the culture it comes from. Gamelan music is something that you cannot remove from Indonesian society. Well, some of the music that comes from Louisville, although it might not have quite the historical tenure as those things, is part of it. The bands you see when you're forming your musical ideas and the interest kind of piqued by seeing bands in your own town. They are all trying something different because there is not one scene. It is not one big city that has one big band. There are lots of bands. 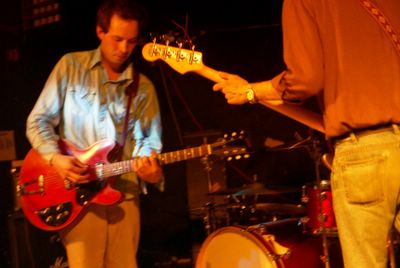 DC: What is up with all the nautical imagery?
JN: I think that is very surface. There are five June of 44 records; very few of them have sincere nautical things about them. There is one Rachel's record of five and the Shipping News has a name that is related to it. The Shipping News knew that we were going to get nailed for that. We did it almost knowing that . . .
KC: Kind of like a joke that doesn't translate all that often.
JN: The whole concept of what the two words in shipping news...we just like the connotations of it and it is kind of archaic in a way, and sort of older technology. It's really less premeditated than it seems. The culture in Louisville is a river culture. The city is there because of the river. After the fact I started finding out about the history of the town. The main hub that became Louisville became Shipping's Port, where the falls of the Ohio were impassable so people started trading and staying. It is in the culture there. It would be just as much to say that we would make songs about tobacco and horses and bourbon and basket ball. Luckily for people, we did not do five or ten years of basketball records because I think Kurtis Blow pretty much nailed it... He said what needed to be said on the subject. It is just a romantic ideology. It is an antiquated aesthetic. We like old things. We like dirty creaky, rotten looking things.

DC: Are you going to have films?
JN: That is only with Rachel's. Kyle does sort of an interpretive dance. Some times he gets shy and won't do it. Some nights he is on fire. That is the only visual part of the show.
KC: I do an eleven finger hand jive.
JN: It is called legend of the eleventh finger. You can just imagine what that might entail. The nautical stuff is part of a lot of things that we find interesting. It captures our imagination. It is fun to draw on history. Even if it seems like were being a little myopic.

DC: What band were you in before shipping news? What instruments do you play? (to Kyle)
KC: I've played different bands around Louisville. The most recent before shipping news was Eleven Eleven. I play drums, I play guitar too.
JN: He played in Metroschifter, Rachel's toured with Metroschifter. All the bands played together, it's that kind of town.

DC: I really like the "Quiet Victories" song off the last record. It could very easily come off as preachy but it doesn't. It really works well the way it is understated.... because there are a lot of bad folk singers out there...
JN: (laughs) Bad Folk singers?

DC: That sing about the same thing. It seems kind of insincere when they do it, maybe not insincere but....
KC: It kind of doesn't hit.

DC: It doesn't have the emotional impact, I guess, is what I am trying to say. That is a quasi-political song. Are there any songs in the past that are political?
KC: I think that song is as much subject and story. I think you're right when you call it quasi-political and also a tribute to other music. Jason wrote the music so he would be better to answer it. For what our band is in reference to a question like the input of political ideas things like that, it is definitely not like that. If there is something to be said through some piece of history that has story with some impact or tragedy, there are lots of sort of tragic elements to our music. That song fits in for most into that way of thinking about it then to say that there is some ultimate political structure behind those ideas.

DC: Is that song based on an actual event?
JN: Unfortunately, that song is based on lots of actual events that are readily available to read about; it is really just a colonial mind set. And just you know people who are unscrupulous who come in and take...
KC: ....Put other people down. That song in my mind can be related to injustice of many kinds, from person to person... society to society.
JN: There's been political content in things that we have done. We've always poked at it. It is a real difficult thing to include and it not be trite. Stuff like that we write on our web site or have printed over the years; we definitely try to think of our selves as involved with those subjects. There are some of things in my life that can be easily contradicted; the ideals... I want to strive towards a point of morality. When you get into singing about things the fear is that it would come across preachy.... 'well what are you doing about it?' 'What is your answer?' The only answer in that particular song is not some grand scheme. It's really just that the small things can survive. That is a hard thing to even summarize. Luckily, the way we approached that song was talking about a relation ship. It was just about...

DKC: The two people
JN: We approach everything on a person to person level. That is the only frame of reference that I have. I just respond to that kind of song writing. That song is definitely not some original concept. There are other songs about… there is "Cortez the Killer" There are a million people who have written about it... Even in a weird way some of the things that we fixated on like the whole beautiful element of the ship; the romantic idealized version of it. Our world is a product of these people going everywhere. The modern world is a product of this power struggle. It is hard not to want to talk about it. The power struggle applies to a relationship song. You are trying to do what is right and things get fucked up.