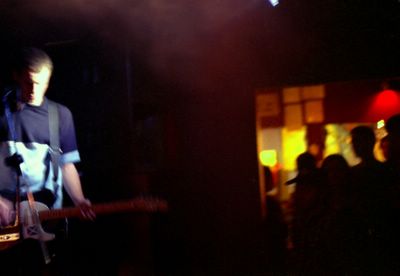 Dan Cohoon: How has growing up in Scotland affected your musical outlook?
Stuart Braithwaite: I don’t honestly know as I have never lived anywhere else.

DC: How are you received by fans and press in Scotland vs. the United States?
SB: People have been more than kind to us both here and in America.
DC: Is there a main song writer in the band or is it more of a collaborative effort?
Most of the songs are written by either Dominik or me, or as collaborations. John did write a song on the LP (Radar Maker). We are all doing stuff at the moment.

DC: Are the songs planned out or do they spring forth from improvisation?
SB: Some were born during improvisations (“Helicon” & “Fear Satan”) but a lot were written at home.

DC: Talk to me about the song “Tracy” on the Young Team album. Is this phone call in the song some one you know, or was it picked up on a scanner? It is one of my favorite songs on that album.
SB: It is a hoax call between our drummer and our manager.

DC: When I saw you play @ T.T. the Bears in Cambridge, MA USA. The crowd reacted very positively towards you. They remained quite during the quietest parts of your set. Do you always get that good of a reaction from a crowd or do you have problems with them being too chatty during your sets.
SB: People vary in different towns. It is nice to be polite.

DC: The piano is featured more on Young Team than on Ten Rapid. Is there any other musical instrumentation you wish to incorporate in future projects?
SB: It was lying about the studio. We want strings and children’s choir on our second LP.

DC: Your music is so emotionally charged. Are these compositions based on real events or are they more abstractly based?
SB: Totally abstract, just music. Make of it what you will. 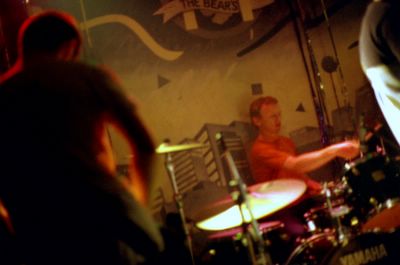 I did a second interview with Stuart Braithwaite over the phone in the winter of 1999 just as Mogwai was about to release Come On Die Young. -Dan Cohoon

DC: Tell me about the new album?
SB: It’s called Come On Die Young. It has 12 songs, it’s a lot quieter than the last one (ed. Young Team). This fist song got a big kinda speech that we took from Iggy Pop interview in the 1970’s
DC: Why did you record in the US?
SB: I think we really needed to be away from any distractions…Had the opportunity to just get on with things, than rather kinda forget to go and stuff.

DC: How did you like upstate New York?
SB It was kinda nice, it was quiet. It wasn’t really jumping.

DC: Tell me about the album title Come on Die Young.
SB: The gang Come On Die Young was the gang that Barry, our new keyboard player, his dad was in, in the 1960’s.

DC: I guess they are a little bit different than the US versions?
SB: Of gangs? (Laughs) Yeah…They are very different. I don’t know any real American gangs. People in Scotland don’t really have guns. That’s a pretty major difference. They don’t shoot ya; they just kinda stab ya…much more stabbing.

DC: Tell me about the “No Education=No Future…Fuck the Curfew” EP. What role do you see the musician to effect political change?
SB: Not really any to be honest that was just something we felt strongly about. We never really had any agendas as to what would happen. It turns out nothing happened. The main thing we did make little stickers that said “fuck the curfew.” We probably pissed some people off. So we pissed some cunts off. That is really as far as things went.

DC: Tell me about “Kicking a Dead Pig.” I grew up listening to mainly classic rock, so I don’t have much knowledge of dance music. I really like that album because it’s really not danceable.
SB: No, no, no, nothing we ever did was it possible to dance to. It’s always too slow. We really liked classic rock as well. At the same time we really like the music like Kraftwerk & Aphex Twins, that kind of thing.

DC: On “Young Team” there are several biblical references in the song titles. I was just wondering what kind of religious upbringing you had and what effect it had on your music.
SB: The only member of the band who is religious is Dominic. He is a Catholic. I suppose things like “Mogwai fears Satan,” that’s kinda of connected directly to Dominic’s fear of the devil from his Catholic upbringing, which kind of continues to this day. None of the rest of us is religious at all.

DC: What kind of music were your parents into?
SB: I don’t know. Just kinda folk music & Scottish traditional music, My Mum’s from the highlands. She listens to a lot of Gaelic music. I don’t know if that made an impact at all.

DC: The song “Tracy” uses a crank phone call. Who was it on and what was the joke?
SB: That was Martin, our drummer, fooling up are manager Colin, telling him that me and Dominic had a fight and that the band split up.

DC: How long did you pull his leg for?
SB: For about 15 minutes. He started phoning people up, it got quite complicated.

DC: What kind of music did you listen to growing up?
My favorite band growing up was probably The Cure. Then I really got into bands like Dinosaur and Nirvana (those kinds of things). I really liked Bauhaus & Sonic Youth. I got really into them.

DC: Which instruments do you play?
SB: I play the guitar. Sometimes I play the drums, the bass and the piano as well.

DC: You also did some of the remixing on Kicking a Dead Pig? Did you have any experience before doing that, with that sort of thing?
SB: I did some music in college. So I know how to work computers and sequencers and stuff. That’s really the only experience before that. I did some remixes since then as well, David Holmes, Paradise Motel, Manic Street Preachers.

DC: How do you guys like playing in the US?
SB: It is pretty nice. A lot of bands come over from Britain and they play to absolutely no one. When ever we play there are always some people there. That is good. It not that different then playing here than Britain. I quite enjoy it. We don’t play really big shows. We can’t afford to bring as many sound guys as we normally have. 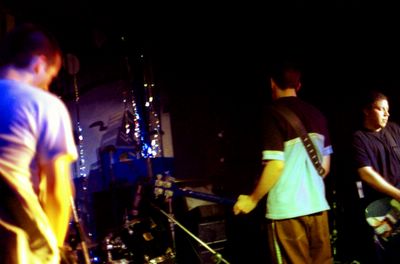 DC: Is the set up different?
SB: There is usually more when we play in Britain. When we play Britain we have more stuff going on. Our sound guy puts the whole mix through an analog keyboard. He’s got lots of tape loops and shit, as well.

DC: How did you guys choose to do the new album on Matador?
SB: It seemed like a good idea. To be honest we sorted that out after we finished the record. We just try and do these things to the best we can. It seemed like the best thing to do. It seems to be working out pretty well too.

DC: What is different from the album Come On Die Young and Young Team?
SB: It’s just a progression really. We just left a lot of the stuff that was becoming quite repetitive, we kind of stopped that. We are trying to make stuff a bit more interesting, changing a lot of the time changes, and a lot of new sounds.
DC: What kind of sounds?
SB: Just sampled things and just mixing them around, mixing things backwards.

DC: On the first song on “Young Team” what is that speech from?
SB: That’s a friend reading out loud a review we had in Norway….a bit over the top. We kind of just exploit that.